In typical MCU fashion, She-Hulk: Attorney At Law has had plenty of hilarious moments, from petty fights to unexpected MCU cameos. The latest events revolve around Mr. Immortal, who shows up at Jennifer’s workplace in search of legal representation after 9 former partners accuse him of faking his own death to get out of marriage. His partners all complain about being led to believe he has died, only for him to move to a different marriage without any divorce settlements.

Though Mr. Immortal’s arc in the Disney+ series is strictly tied to his romantic relationships, he gets to have more adventures in Marvel Comics. There, the character, who first appears in The West Coast Avengers #46, even has an incredible costume that MCU fans haven’t gotten to see. So, what other details about him are only available on the pages?

In GLA: Misassembled #1, the kid Craig Hollis attempts to take his own life after accidentally causing the death of his own father. While doing so, he discovers that he is immortal, an ability he acquired after he was visited by the cosmic entity, Deathurge. Happy, Craig christens himself Mr. Immortal.

It’s a simple origin story that helps erase a moment of grief. Unfortunately, Mr. Immortal has never gotten off the excitement of having powers. As seen in the series where he willingly jumps off a building, his powers make him quite the daredevil as he constantly places himself in danger, aware that his heartbeat will resume within seconds. It also helps that Deathurge, who happens to be the messenger of death, likes him very much and is never keen on punishing him. Luckily, Mr. Immortal rarely uses his powers for selfish purposes.

9 Mr. Immortal Had A Stable Relationship With Dinah Soar

In the series, Mr. Immortal is said to have gotten married to many women, but in the comics, his love life is much more stable. On the Marvel pages, he pairs with the superhero Dinah Soar, whose species requires her to mate with one individual for life.

While the womanizing Mr. Immortal seen on screen is funnier, the version in the comics is more likable. He and Dinah share one of the best Marvel love stories because they bond over many things. For example, she is the only one able to calm him down whenever he has fits of rage, which normally come about after a near-death experience. Sadly, there is a tragic aspect to their story. Four years into their relationship, Dinah dies, leaving him without a lover for centuries.

8 Mr. Immortal Gets Killed By Hulk On A Different Earth

In World War Hulk: Front Line #4, Mr. Immortal and a couple of other heroes from Earth-71143 try to stop a rogue Hulk when invades Earth with forces from Sakaar, aka, Planet Hulk. Unfortunately, they all get massacred.

It’s a strange moment in the comics and one that can be blamed on a continuity mistake because no explanation is given as to why Hulk is able to kill an immortal superhero. Additionally, it’s never revealed whether this version of Mr. Immortal stays dead. Still, since there tends to be slight differences in variants of the same character, it could be argued that Mr. Immortal of Earth-71143 isn’t meant to live forever like the one on Earth-616.

7 The Great Lakes Avengers Forms Via A Newspaper Ad

It’s an unconventional way of doing things since the procedure of the formation of most of the best superhero teams involves the members being approached individually. It’s what Nick Fury and Professor X do to some extent. However, Mr. Immortal’s move makes sense since the heroes he attracts are those that are neglected and inexperienced. Upon learning about the Great Lakes Avengers, Hawkeye even offers to train the members for free.

6 Mr. Immortal Lives Past All Other Heroes

When the Exiles head to Earth-26749 in Exiles (Vol 1) 69, they discover that there are only two remaining survivors. Hulk happens to be one of them, with the other being Mr. Immortal.

It’s a fulfillment of destiny since, in Immortal Hulk #24, Deathurge claims that Mr. Immortal will eventually be the only survivor of the universe and live beyond the end of time after merging with the Sentience of the Cosmos. Given this revelation, it’s clear that Mr. Immortal is the most important superhero in the universe. Sadly, he remains one of the most underrated Marvel heroes. And since he has only been treated for comical purposes on screen, it’s unlikely that he will be a major player in any of the future MCU phases.

In Marvel Comics, Homo Supreme is described as the final stage of evolution after Homo Sapiens. According to G.L.A.#4, Mr. Immortal is the only one who ever reaches this stage.

The revelation is tied to the fact that Mr. Immortal will be the last remaining survivor of the universe. The technological and medical experiments on the human body will kill some, and so will the environmental factors, but Mr. Immortal will be the only one to enjoy the benefits. But with no other humans to interact with, it’ll be difficult to see how advantageous being a Homo Supreme is compared to being a Homo Sapiens.

During the “Civil War” events, the Great Lakes Avengers adhere to the Superhero Registration Act. However, Deadpool, who thinks they are unregistered, attacks them as a way to please the government.

Deadpool’s entire arc during the “Civil War” storyline is a disaster as he pays the price for going about things his own way at a time when everyone is teaming up. His goal is to get hired by S.H.I.E.L.D, but even the Great Lakes Avengers defeat him. He also suffers defeats against Cable and Taskmaster. As for Mr. Immortal and his buddies, defeating Deadpool changes their fortunes. From then, they become one of the major superhero teams the government calls upon in times of crisis.

3 Mr. Immortal Burried Himself For A Year

In an effort to end his drinking problem, Mr. Immortal decides to bury himself for a whole year in Great Lakes Avengers #2. He also orders his buddy Mike to keep an eye on him to prevent him from changing his mind.

Mr. Immortal is one of the few Marvel heroes through which deeper themes are covered, and this is yet another example of that. Ideally, the superhero should be happy about the fact that he’ll never die, but various issues such as the death of his lover take a heavy mental toll on him. The extreme manner in which he chooses to solve the problem makes him an easy character to sympathize with, too. 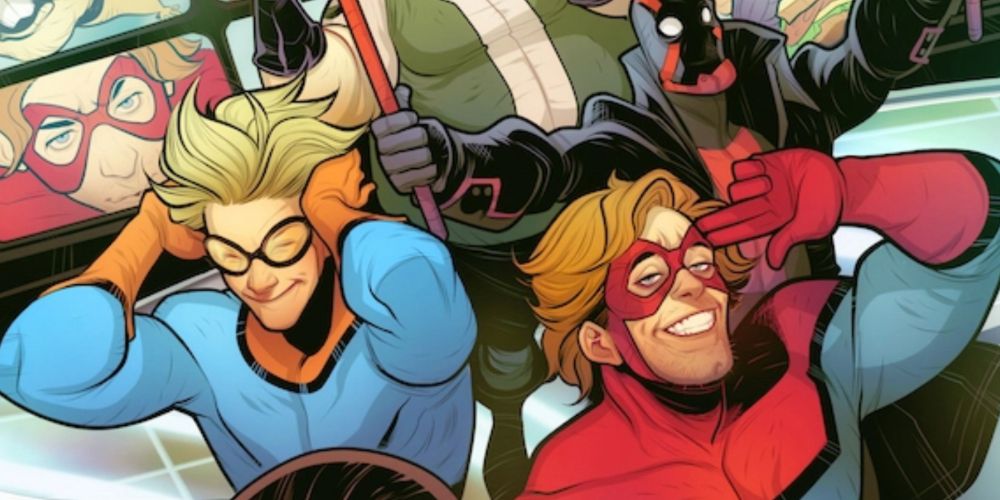 Mr. Immortal leads the Great Lakes Avengers in several attempts to gain relevance. In Deadpool (Vol 3) #11, they try to cash in on the popularity of the Thunderbolts by renaming themselves the Lightning Rods. And in GLA #2, they declare themselves the Number 1 team after the main Avengers disassemble.

The desperate move bears no fruits because it turns out The Thunderbolts are actually villainous. The revelation paints the Great Lakes Avengers as incompetent heroes because they obviously should have done their homework. Declaring themselves as the replacements for the Avengers fails to work, too, because they are simply not as good. Nonetheless, Mr. Immortal deserves to be lauded for being ambitious.

In GLA: Misassembled #4, Mr. Immortal discovers that all members of the team are actually mutants. He then renames the group the Great Lakes X-Men

Rebranding comes with a new perception, and thanks to a name change, Mr. Immortal and his buddies are taken more seriously by other heroes. And it’s not just the name that changes. Their wardrobe does, too, with every member taking a tour to their tailor and coming back with a new costume. The change in costume also comes with an added advantage: safety. Going forward, Great Lakes X-Men stop being a target for villains that had previously identified the team as a weak one.

NEXT: She-Hulk: 10 Most Powerful Members Of The Lady Liberators, Ranked